The annual festival called Christmas has grown to be one of the world’s largest celebration. It’s observed by billions of people, not only by Christians who use it to remember the birth of Jesus of Nazareth, but by those who observe it on a secular, rather than religious, level.

The name “Christmas” comes from the Old English word that means “Christ’s Mass, and in some Christian churches, it is anticipated by the season of Advent or a Nativity fast. Some countries refer to the Nativity of Jesus in naming the holiday, including an old French word that became “Noel.”

During that time, many Christians read the Gospel nativity accounts by the physician, Luke, and a former tax collector, Matthew. Their New Testament books tell how Joseph and Mary, a couple in the Jewish faith, traveled from Nazareth to Bethlehem to comply with a census order issued by Caesar Augustus of Rome, which occupied their part of the world.

When the couple arrived in Joseph’s ancestral city, they found no proper lodging, even though Mary was pregnancy and near her term. They found shelter among animals, where Mary gave birth and used a manger as their newborn baby’s bed.

According to the Biblical Gospels, angels proclaimed the birth to nearby shepherds, who raced to town to see the baby. Later, Eastern astronomers journeyed far to bring the family gifts of gold, frankincense and myrrh.

The four Gospels describe the life of Jesus. His followers were considered members of a Jewish sect, not a separate faith, for several decades after his crucifixion by Roman authorities. Initially, Christians did not start celebrating Christmas right away, focusing instead on his sacrifice and resurrection.

About 400 years after the actual event, western Christians set the Christmas date as Dec. 25, not because they believed Jesus was born then, but to coincide with established holidays of Saturnalia and Winter Solstice as well as the birth of a Persian deity Mithra that also was adopted by ancient Rome.

Saturnalia, honoring a Roman agricultural deity, was celebrated with public banquets and gift giving. Some presents were given with written poems attached. Parties and an overturning of Roman social practices became part of the celebration. Romans were allowed to gamble, and slaves were given table service, either waited on by their masters or were allowed to dine with them.

Winter solstice or midwinter, which this year was Wednesday, marks the shortest day and longest night of the year in the Northern Hemisphere. It is celebrated in many cultures as a time of renewal, or a time of feasting before the chill of deep winter set in. Cattle were slaughtered and eaten, to avoid having to feed the livestock during a winter famine.

Many early Christians chose not to celebrate Christmas, choosing to disassociate themselves from pagan holidays or the elaborate and sometimes detrimental or raucous ways earthly kings celebrated their birthdays. Through early medieval times, most preferred to celebrate Epiphany, the day Jesus first was taken to a temple.

But the holiday gained prominence in the year 800, after Charlemagne was crowned emperor of the Holy Roman Empire on Christmas Day. Subsequent rulers also chose that date for their coronations or other important events.

Celebrants began incorporating customs of their lands. German and Nordic midwinter celebrations, or Yule, were the inspiration of such Christmas symbols as evergreen trees and wreaths and some of the early images of Santa Claus.

Scandinavians also introduced the use of mistletoe, thought to be lucky, as a sign of love and friendship – hence the custom of kissing under a sprig of the plant. Other cultures added lights and the idea of being charitable. Eastern Europe customs introduced the Christmas carol.

Celebration in the United States rose and fell with politics. Some of those who did not observe Christmas considered it too “English” or royalist.

In the early 19th century, Charles Dickens wrote “A Christmas Carol,” which became not only a popular book but a literary work that revived Christmas as a family-centered celebration.

The Christmas tree was introduced to England about that time, promoted by Queen Charlotte and later by Prince Albert, consort of Queen Victoria, who also came to love the German custom of decorating a cut evergreen that is brought indoors.

In the early 1800s, the American writer Washington Irving inspired Christmas celebrations in the United States.

Then in 1822, Clement Clarke Moore of New York wrote “A Visit from St. Nicholas,” more popularly known as “The Night Before Christmas.” The poem resulted in more shopping for gift-giving.

In 1875, Louis Prang introduced Christmas cards to Americans. By 1870, Christmas was declared an American federal holiday.

But it wasn’t yet a universally-celebrated holiday. In England, some still considered it a celebration only for the rich. In other countries, it was a matter of politics. For instance, Nazi Germany replaced Christmas with a time to promote regime propaganda. During the Cold War, the Soviet Union prohibited public celebration of Christmas, and children were taught to campaign against it and other religious traditions.

But the holiday was spreading slowly throughout the world. In countries that had experienced colonial rule learned about Christmas through its ruling minorities. The people kept the customs after they gained independence. In other places where Christians are in the minority, some countrieshave adopted the secular portions of the holiday celebrations.

In places where Christianity has many followers, homes may have Nativity scenes, popularized by St. Francis of Assisi. Places are decorated in red, symbolizing Christ’s blood, the green of evergreens that symbolize eternal life, and gold, one of the Magi gifts to the Christ child.

The tradition of feasting also continues, although what is served varies by country and culture. In the United Kingdom and places it has influenced, the meal may center on a turkey or goose, with sides of Christmas puddings, mince pies and fruit cake.

Eastern European countries and Scandinavia often serve fish or lamb, and many countries have a Christmas bread or sweet. Because oranges are available in winter, they often are associated with Christmas food.

Santa Claus, who goes by the name Father Christmas, Pere Noel and St. Nicholas visit children to provide gifts. In fact, Santa Claus’s name is derived from St. Nicholas, a Greek bishop who lived in the fourth century and was known for his generosity to children and giving of gifts.

In some countries, the Santa Claus or St. Nicholas figure rides a horse or donkey rather than a sleigh drawn by reindeer. Some cultures don’t have Santa Claus traveling alone, either.

But many of his companions are mischievous, and others are threatening – to the point of beating naughty children or threatening to take them to hell if they don’t learn to behave. Others are said to kidnap children and take them to foreign countries for a year unless St. Nicholas or an angel intervenes.

The Scandinavians’ Black Pete story may be traced the black crows that advised Odin about the good and bad behavior of children. He sometimes has been depicted as Santa’s page or a rescued servant who is loyal to his benefactor.

Knecht Ruprecht, or “Farmhand Rupert,” wears little bells on his clothes and asks children if they have been good and faithful, or may ask the children to entertain him and Santa Claus. Those that answer or perform appropriately are rewarded with fruit and sweets. The rest are beaten with his sack of ashes.

Another companion is the Krampus, whose story comes from Alpine countries. Krampus, a horned and hoofed goat demon, has his own holiday, Dec. 5, the eve of the Feast of St. Nicholas. The creature is dressed in rags decorated with bells of warning and carries chains he sometimes throws at children. Some interpretations have him catching ill-behaving children and popping them into his sack, which he beats with switches.

The German Belsnickel or Pelsnickel wears a mask and clothing of fur, and delivers socks and shoes of candy to good children, but coal and switches to the naughty ones. The French Pere Fouettard is said to have been a butcher who lured children into his shop, and is accompanying Santa Claus as his punishment.

The Czech tradition says it’s the devil himself, bound in chains, accompanying Santa Claus and threatening children. Often an angel joins them to protect the youngsters against the devil.

In some Latin American countries, Santa Claus gives the presents he has made to the infant Jesus, who then distributes them. In other countries, the Christ Child, whose title is the source of the name Kris Kringle, provides the gifts, and Greece, they come from St. Basil, but on New Year’s Eve.

Boxing Day, Dec. 26, is celebrated on British-influenced countries and in Europe, and the name refers to opening the alms box that contained donations to the poor. Working people once went to their delivery places to collect their boxes from those they served; now the gifts have mostly been replaced with tips.

Some families carry on the tradition of “Jesse Trees,” a medieval practice in which branches are decorated to tell the story of the Bible from creation to Christmas through such symbols as the Earth, fruit, a rainbow, ladders, rams, a colorful robe, lambs, crowns and the Christ child in a manger. Some Christians and their churches decorate their evergreens with religious symbols associated with Biblical stories and metaphors.

This year, Hanukkah, the Jewish Festival of Lights, began December 2 and ended December 10.

It commemorates an event that took place about 160 years before the birth of Christ, and it recalls the rededication of the second Jewish temple in Jerusalem.

The temple was in the Seleucid Empire ruled by King Antiochus IV, who wanted his country to be more Greek. As he retreated from a battle, the king stopped in Jerusalem and vented his anger, including having his soldiers take all treasures from the Jewish temple, destroying its holy scrolls and setting up a statue of Zeus. He then banned the Jewish faith, punishing worshipers with death.

After his father was killed for refusing to abandon his faith, a Jew known as Judah Maccabee, or “Hammer,” led a successful rebellion. He and his army reclaimed the defiled temple, but the victors didn’t have enough holy oil for its rededication. More oil was ordered but wouldn’t arrive in time. In the meantime, the scant supply lasted the eight days needed to complete the temple’s rededication.

Another holiday, Kwanzaa, is celebrated Dec. 26 to Jan. 1. Its name comes from a Swahili phrase that means “first fruits.”

It is considered a secular cultural festival, rather than one associated with a faith.

Kwanzaa was developed by Maulana Karenga as a specifically African-American or pan-African holiday to celebrate community, family and culture, especially among those of African heritage. It was first observed in 1966-67.

Its celebration involves a candle holder called a kinara that holds seven candles – three red ones on the left, three green ones on the right and a black candle in the center.

The candles represent the seven principles of Kwanzaa – Umoja, or unity; Kujichagulia, or self-determination; Ujima, or collective work and responsibility; Ujamaa, or cooperative economics; Nia, or purpose; Kuumba, or creativity; and Imani, or faith.

Among other holidays marked in December are Bodhi Day, recalling when Gautama Buddha attained enlightenment; the Kemetic Orthodox religion’s Return of the Wandering Goddess Hathor, an Egyptian winter solstice celebration; Id al-Fitr, which also has been called Eid al-Adha or Ashura, a remembrance of the birthday of the Prophet Muhammad; Omisoka, a Japanese year-end celebration; Shabe-Yalda, an interfaith Iranian celebration of the sun’s rebirth, and the secular and quirky Festivus, created in 1966 by New York writer Daniel O’Keefe, whose son, also named Daniel, popularized it through his script for an episode of the television show “Seinfeld.” 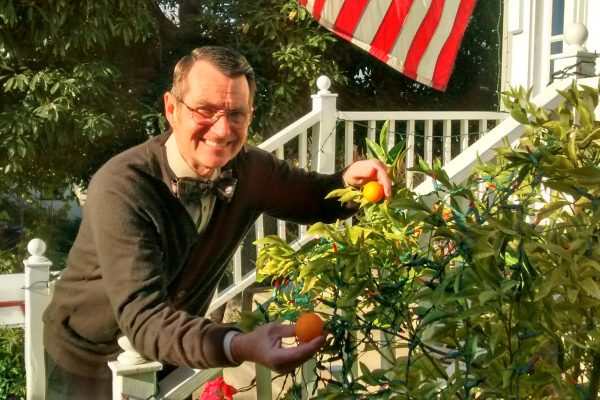 At Home With Vivian: Googly eyes and styrofoam