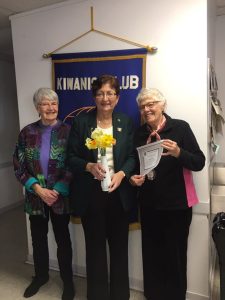 Daffodils are bright and pretty, and February is the peak of the San Francisco Bay Area’s spring flowering season.

Members of Martinez Kiwanis Club learned even more about the popular flower when Martinez resident Nancy Tackett, president of the American Daffodil Society, spoke to their February meeting.

The flowers also are poisonous, from the bulb to its top, and anyone who comes in contact with the dripping fluid of a cut stem should wash hands thoroughly.

Oddly enough, it’s that poison that helps in the migration of the plant, Tackett said.

She described how Roman soldiers carried daffodils with them as they traveled. If the soldiers were captured or severely injured, they’d eat the bulb to end their misery, she said.

But daffodils also have been carefully cultivated, starting with the same plants carried by the romans, to produce a variety of sizes and colors. There are more than 42,000 different types, including narcissi and jonquils, all with six petals and a center cup – the hallmark of the daffodil.

This is one of many programs members of the Kiwanis Club will hear this year. The club meets at noon Thursdays at 750 Allen St., and the public is welcome.