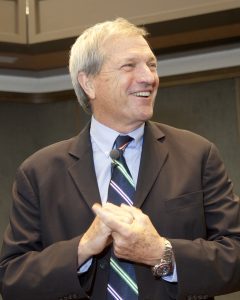 “We’ve been heartened by all the support, strength, and birthday wishes for our Dad. It’s inspiring to hear from so many who care for and have shared so much with him over the years. Our Dad remains in critical condition but is stable and continues to be characteristically resilient. While his situation remains serious, he is showing progress as his doctors continue to treat his pneumonia. His road to recovery is uncertain, ongoing, and will take time. Right now, our priority – and his – is ensuring improvement continues.

“Even in the most difficult times, Dad has always had faith that California and America are strong enough to face any challenge. And we believe the same of him,” said Tristan and Tucker DeSaulnier, Congressman DeSaulnier’s sons.

On Friday night, March 16, Congressman DeSaulnier was admitted to a hospital in the nation’s capital to be treated for complications of pneumonia following a traumatic rib fracture that occurred after falling during a run. (DeSaulnier has been an avid runner and has completed over 21 marathons) He was in serious but stable condition for several days and the hospital later confirmed that he tested negative for COVID-19. Four days later, on the 21st, his condition had deteriorated further to a critical condition, where he remains at this date.

He lives in Concord, California where he raised his two sons Tristan and Tucker. Mark was elected to Congress in 2014 and proudly represents California’s 11th Congressional district which includes the majority of Contra Costa County. For more than 30 years, Mark has been a leader on issues of great importance to working families including guaranteeing a livable wage, ensuring education is affordable and accessible, making investments in job training, and keeping good paying jobs locally.

Congressman DeSaulnier is one of several select members of Congress, invited to serve on four committees at the same time. He currently serves on the committee on oversight and reform, the committee on transportation and infrastructure, and the committee on education and labor. He is also a member of the exclusive House committee on rules where he has the opportunity to work on major issues of legislation before they are brought to the house floor for a vote. A much respected and often praised public servant, DeSaulnier is admired both by his district’s citizens, and many community leaders and county officials.