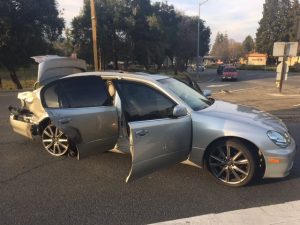 Three of the four in the vehicle have been apprehended, but police are still seeking the fourth person, they said.

On Thursday, January 3, at 1:58 p.m., an alert citizen contacted the Pinole Police after seeing two subjects enter the backyard of a house in the 3600 block of Ponderosa Trail.

All three were booked at the Martinez Detention Facility and charged with residential burglary. John Woods and Jhacorieo Rooney were also charged with violation of probation. The fourth suspect was described as a black male in his 20’s and has not been located or identified.

Anyone with information regarding this crime or similar incidents is encouraged to call the Pinole Police Department at (510) 724-8950.