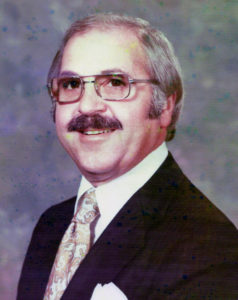 MARTINEZ, Calif. – John Sparacino, Martinez’s first elected mayor and a man described as a gentleman and “Mr. Martinez,” died Tuesday at home at 92.

“He deserves a public tribute. Everything he did was ‘first cabin,’” said Gus Kramer, Contra Costa County’s assessor. “He was always a gentleman.”

“John was ‘Mr. Martinez,’ and he will be missed by the entire Martinez community,” said Mayor Rob Schroder.

“John was an icon in Martinez. A lifelong resident from a multigenerational Italian family, a business owner, a community volunteer and the first directly-elected mayor of Martinez,” he said

“I sought out John’s advice and wisdom from the time I first entered public service to the day he passed,” he said.

A San Francisco Chronicle columnist once described Sparacino as “a dapper little man,” and many of his friends said “dapper” was the perfect adjective.

“John Sparacino was the biggest man I’ve ever known, for only having just over a four-foot frame,” said another close friend, Marty Ochoa, another popular Martinez figure who also has been the city’s Santa Claus. “Back in his heyday, he carried the entire city of Martinez on his shoulders.”

Ochoa said that Sparacino ran his own business, “and had the largest ears of anyone to listen to all his constituents, family and many, many friends.”

But Sparacino wasn’t just interested in politics and public service, Ochoa said. “I remember sitting outside with John at his Escobar Street home, just talking. We didn’t dwell into much of any one topic, but he would always ask about my mom, Betty Bartolomei Ochoa,” he said.

“He would always talk about the good times they had in high school, as the two of them always led the class for being the shortest in the graduating class of 1943,” he said.

And Sparacino and his family understood hospitality to those visiting their homes.

“John’s front door should have been a revolving door, as there was always somebody coming or going,” Ochoa said.

“Usually one of his sisters would come out and say, ‘John, did you offer Marty a drink yet?’ I always tried to be polite and say no, but if you ever knew John, you would realize that a 7-Up was always on its way, as that was his drink of choice,” Ochoa recalled.

“He always said, ‘Marty, if you ever run for politics, you’ll win, as nobody will vote against Santa Claus.’”

But public service was never far from Sparacino’s mind, Ochoa said. “One of John’s happiest days was his election in 1978; John Sparacino became the first Italian American directly elected as mayor of Martinez.

“John continued to take part in civic affairs into his 2002 election. John’s devoted his love of Martinez that will always carry on, and his humanity and compassion for Martinez, along with his better good will live forever,” he said.

Kramer said Sparacino would encourage others who were interested in public service.

For instance, if someone were to run for office for the first time, Sparacino would encourage the candidate, even if he had decided not to support the candidacy, Kramer said. If that person won and sought reelection, Sparacino would share even more counsel on how to succeed in the contest.

“He was never, never mean-spirited about the opposition,” Kramer said. “’Take the high road’ was his mantra. We could use him today. He set the bar high in Contra Costa County, and from time to time, he was disappointed at how people acted.”

Kramer met Sparacino after he moved to Martinez from Pittsburg. He learned that many of the Italian families of Pittsburg have relatives in Martinez, and he was encouraged to look up Sparacino and stop by his clothing store. “You will love this guy,” he kept being told.

“He was a character. He had an institutional memory, and would share it with you in snippets, so he wouldn’t bore you.”

Sparacino worked hard when redevelopment was “a big thing,” Kramer said. He realized that while the city’s downtown might be its heart, its economic driver was along California Highway 4. “Downtown couldn’t ride on its coattails,” he said.

Speaking of coattails, Kramer and Sparacino often would talk about the suits Kramer bought from Sparacino’s menswear store. Once home from World War II, in which he served in the Navy, Sparacino first worked for Middleton Marchi men’s Clothing before starting Sparacino’s Menswear with his brother, Nunzio.

Kramer would joke with Sparacino that the suits he bought had lasted 22 years. “I always teased him about that. They lasted through my jobs with the county.”

Kramer said he saw Sparacino about once a month, and he and past tax assessors, including Sparacino, would get together annually.

“He was always there – a wonderful friend,” Kramer said.

“He was a gentleman. His house was always open. He was gracious.” Kramer said Sparacino was from “an era gone by, raised by people who believed civility and being polite was paramount.”

His legacy includes some of the city’s special sites, such as the Don Vicente Plaza, which was used to celebrate the Martinez centennial and the American bicentennial in 1976.

He also was among those who helped preserve the Borland House that is the Martinez Museum. At one time, the historic home was going to be demolished for parking.

City Historian Charlene Perry and her husband, Al, were essential in preventing the home’s destruction.

Meanwhile Sparacino used his position as mayor and his negotiating skills to convince the Contra Costa Community College District, Contra Costa County officials and others in the city to leave the house standing so the Perrys could get the Martinez Historical Society founded and start the museum.

Sparacino’s observations could be sought on multiple topics. He once was quoted by a Washington Post writer when Proposition 13 was still a concept being formulated and considered. When some suggested the proposed proposition could grow into a movement that changes how taxes and government financing are viewed, Sparicino was quoted as calling Proposition 13 “a revolution without bullets.”

He came from Martinez’s Italian fishing community. His father, Joe, was a fish wholesaler who bought catches from local fishermen, cleaned and boxed them in ice and shipped the fish to San Francisco markets. Joe Sparacino also rented small boats and had a bait shop.

The future mayor and his brothers grew up helping with the boats and the shop, while his mother and an ant repaired fishing nets, Richard Patchin recalled in a published interview.

The family wasn’t rich, but Sparacino’s parents made sure their children were cared for. His mother would cut down his father’s shirts for her sons to wear, and occasionally the father cut his sons’ hair.

“He was happy, surrounded by family and even danced from this wheelchair,” she said.

“I grew up admiring his dedication to public service and always addressed him as Mayor Sparacino,” she said.

“My grandparents, Mary ‘DiMaggio’ and Tom Billecci, lived at 321 Escobar St., directly across from the Sparacino home. They had so much respect for John and were extremely proud of his accomplishments,” she said. “Mayor Sparacino once told me that he remembered as a child playing ball with all my uncles on the empty lot that would later be my grandparent’s home.”

Just as he had done with other potential candidates, Sparacino spoke with McKillop when she was considering her Council race in 2014.

“John invited me to his home and shared stories about his time at City Hall. He spoke about having office hours, listening, communicating and connecting with people.

“He gave me encouragement and support, and for that I will always be grateful,” she said. “I cherish the time I spent with Mayor Sparacino, my mentor and friend.”

Another person who visited Sparacino at home is Rich Verilli, a frequent speaker at City Council meetings and a participant in the local Democratic Party.

“I have the highest respect for the man,” Verilli said.

“When he was mayor, I was interested in the politics downtown,” he said. The two would chat, and those conversations gave Verilli “the highest respect for his character and his advice.”

He continued, “He’s always been very straightforward and accurate in his perceptions about what’s going on in the City Council….All the time I knew him, his perceptions and his ind were first rate. I always admired that.” In fact, Verilli said he hoped that as he grew older, he could aspire to and achieve the same ideals.

Verilli said Sparacino’s legacy is his “concern for the community and respect for the citizenry.”

“He’s one of the prime elders of Martinez,” Verilli said.

“I had a favorite line – he was kind of like an Italian Harry Truman, except with a little Italian culture,” he said. “I remember John. I loved the man – you can say that. He was a superhero to me.”