MARTINEZ, CA – In what turned out to be a very different season for graduating seniors, Alhambra students proved resilient and adaptable to dramatic change. Along with cancellation of a traditional graduation ceremony and other senior events was the Awards Ceremony when scholarships are normally handed out. Instead, seniors participated in a Video Awards Show on May 20. Among those honored were four talented seniors recognized for their achievements in the Arts.

Amberly Bateman was involved in three Drama productions at Alhambra. She has been an actor and dancer and has taken art classes throughout high school. Her projects have included digital drawings, short animations, sculptures, paintings, and a mural. She has been accepted at Brigham Young University, Idaho in the fall where she will be studying Illustration before transferring to BYU, Provo for a double major in Animation and Illustration. Her eventual aim is to work for Pixar.

Elam Bender has contributed to eight theatre productions as a Theatre Tech. His expertise has helped to transform stages by monitoring spotlights and microphones. He has also used skills in Stagecraft to create beautiful and ornate sets to complement the drama productions. Elam plans to attend DVC to study Film and the Visual Arts before transferring to UC Berkeley or UCLA. Eventually, he wants to work on a film crew as a film producer. 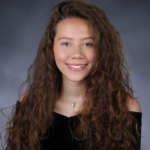 Amaya DeShasier has been involved in art classes every year in high school and has focused on skills in drawing, painting, and set design. She has already taken an art class at DVC and has been accepted at Humboldt State University. 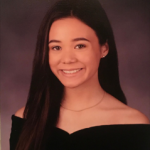 Jennifer Rualo plans to major in Architecture and has created artistic works in watercolor, acrylics, colored pencils, charcoal, and wood burning, among other mediums. Some of her projects have related to social justice issues. She has participated in internships at an architectural firm and with a home builder. She is drawn to architecture because it is a form of art that blends with Math and Physics. She has been accepted at Cal Poly Pomona and at the California College of the Arts.

We wish these young artists the best as they continue their paths in the Arts.

Founded in 1968 as a nonprofit organization, the MAA organizes and participates in many community events throughout the year. MAA’s goal is to encourage art culture and education for the local community. Fundraising proceeds provide scholarships to graduating seniors as well as art grants for elementary through high school teachers.