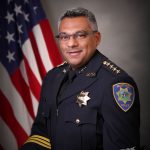 A protest is planned Sunday, July 12 at 4 pm beginning at 725 Court Street and continuing to Waterfront Park. A Richmond-based group is organzing the protest along with several other groups.

Below is information from Chief Sappal.

We recently received information of a large-scale protest planned for Sunday July 12th in Martinez.  While we are still gathering details, we have solid information that the Together We Stand Revolution (TWS Revolution) will be protesting in Martinez on July 12th.  This group has been involved in large scale demonstrations in Minneapolis, Charlottesville, and San Jose to name a few.  This group plans to link up with another group from Alameda County (Southern Alameda County Resistance) as well as with the local group, Martizians for Black Lives (led by Justin Gomez – Ed.).

We did speak to the organizers from TWS Revolution and given the national attention to the mural, the recent vandalism, and the incident involving the brandishing of a firearm we asked that they postpone the demonstration, but they declined to do so.  We anticipate several thousand people may show up as their protests usually draw a large crowd.  While they appear to be a peaceful group, we have intelligence that counter protestors will show up to protest against protestors.  It is during these instances that confrontations can escalate and create public safety challenges.

We will be working with the TWS Revolution group on logistics of their march.  As it stands they intend to meet at the Courthouse at 4:00 pm for a rally and then walk to the waterfront.   We will try to work with them on their walking route in hopes of minimizing any issues to our business community.

We will be making arrangements to have sufficient staff on duty to deal with any issues.  Our plan is to keep a small footprint of officers involved, as we have typically done, in hopes of not serving as a flashpoint for protestors.

We will recommend that the Farmer’s Market not take place as we cannot always predict whether any counter protestors will show up and at what time.

While we are not going to mandate businesses board up, we do recommend that merchants take whatever action they feel necessary to ensure their businesses are protected.  Again, while we anticipate a peaceful protest, we do expect a large group of people in the downtown area.