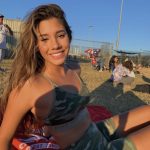 Sienna Sophia Coward, a 15-year-old Martinez native, didn’t know she would be representing the Bay Area when she submitted her application for a new reality show called “Karma”. The show is set to premier June 18 on HBO Max.

Sienna, a Carondelet High student, loves acting and is represented by an agency. She auditioned for the show last year for the summer airing. She submitted a video about herself and why she wanted to compete in an adventure experience. Sienna was one of sixteen chosen from over 14,000 applicants, aged 13-15-years-old, from all over the country.

The show, which was filmed in the  summer of 2019 in the foothills of Yosemite Valley in the Sierra National Forest, features co-ed teams of kids doing physical and mental challenges and solving puzzles for three weeks. The kids got to bond during their time spent together. Sienna is close with her family and said three weeks of no contact with the outside world was difficult. The show, which Sienna said is similar to “Endurance Hawaii”, eliminated someone after every challenge. Sienna, who is on the Carondelet swim team, enjoyed the water challenges. One of the challenges she successfully competed in was a stressful race which involved swimming to several planks in cold water and balancing on beams.

The show filmed for several hours every day and Sienna said she appreciated reality television because she became interested in the production and knowing what happens behind the scenes.  Sienna said the show’s message and theme, karma, relates to the idea not to judge a book by its cover, and that the energy you give is the energy you will receive since social actions impact their success in the competition. All the kids had different personalities, and she said what she learned from the experience is that all it took was getting to know someone in order to become close friends with them. During challenges, kids had to connect through teamwork and building alliances, having trust, and developing friendships. All the kids still stay connected by participating in a group chat and online over social media.

Since she couldn’t reveal spoilers, Sierra is excited to share the show’s release with her friends and family who have been eagerly anticipating it. The reward is $50,000 to split between the winning co-ed team.  Sienna found the overall experience to be very rewarding.  “I knew it would be something I would always remember,” she said.

“Karma” is executive produced by JD Roth, Adam Greener and Sara Hansemenn for GoodStory Entertainment with Fred Pichel serving as showrunner and executive producer.  Tune in beginning June 18 on HBO Max to see if Sierra won.