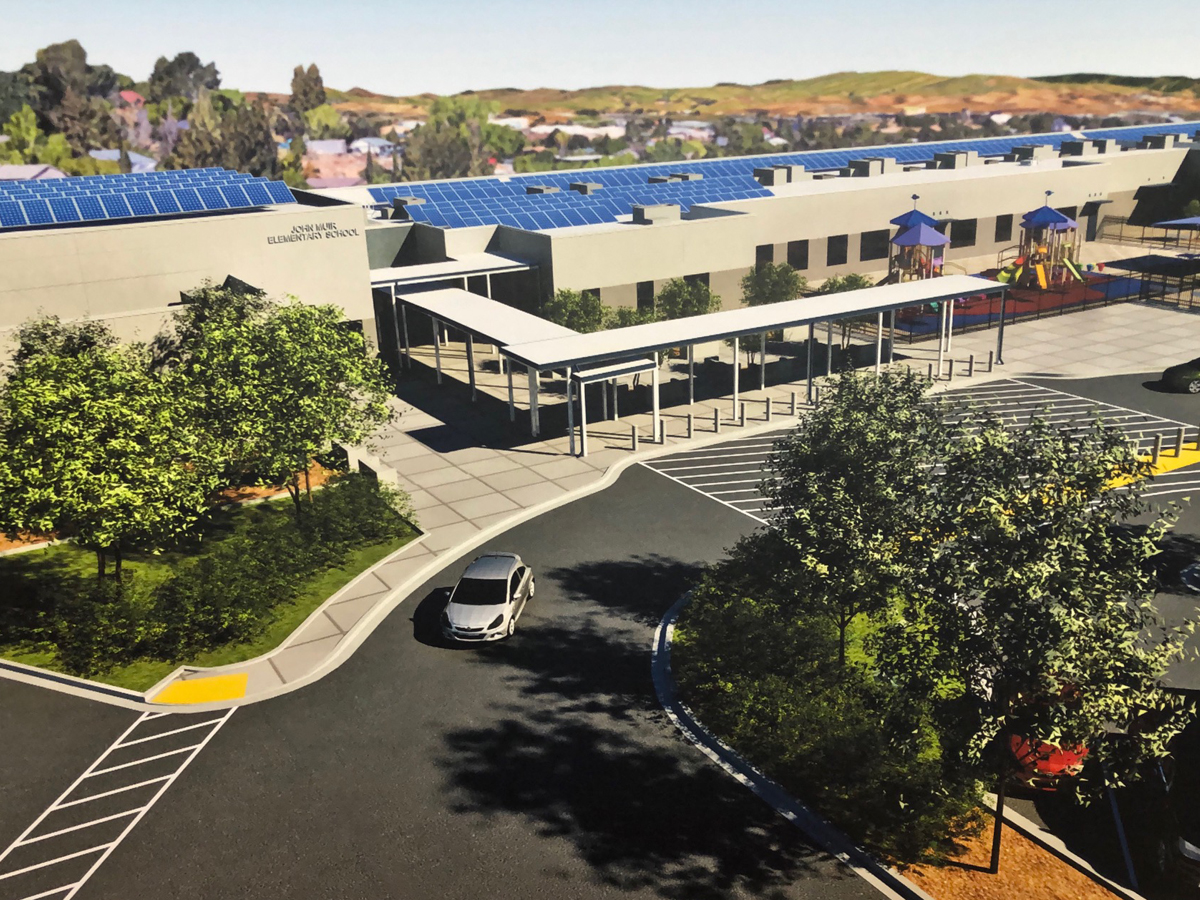 MARTINEZ, Calif. – Years in the making, plans for the new John Muir Elementary (JME) school are visibly coming to fruition 205 Vista Way, and from the back on Holly View Drive.

With framing in place, eager students are asking Julie Webb, JME office manager, “When will it be done?” The architects came to the school and gave the students a presentation, and math teachers have found a practical application for lessons, right outside their window.

“It’s exciting,” JME Principal Kathy Frazer exclaimed. “I tell them, ‘We will be in the new school when school starts in the fall (2020).’” If all goes as planned, the old school will be demolished by November 2020.

Frazer, Webb, students, and parents are peacefully putting up with cramped quarters because they have given up some space on campus due to construction.

“We don’t mind. It will be worth it,” Frazer remarked. “This school is 60 years old. The roof is leaking. It’s just old.”

The Martinez Unified School District board determined the cost and complications of relocating students to another site during construction was too high and would stress children and families. The board also turned down a plan for a two-story school proposed by Architects Jorge Rico and Marcus Hibser of HY Architects.

In October 2017, Board Trustee and building sub-committee member Jonathon Wright described a “Eureka” moment, when the whole group came upon a solution that was better than what anyone had in mind.

It is a one-story building complex set far back from the road. That placement mitigates the serious existing traffic problem by creating a circular drive. It allows students to stay on their campus during construction and provides better space for parking. For security reasons, it also maintains one point of ingress and egress to the campus.

The original plan was to fix the existing multi-use room and kitchen, which reportedly needed air conditioning, energy-efficient windows, and other improvements. That would have cost less than the estimated $30 million for the campus replacement.

Wright and others questioned the wisdom of cutting expenses by renovating now when JME could need further repair in the future and it would never look like a new school building. The board eventually went with Wright’s thinking and unanimously approved the new school buildings.

Architect Hisser admitted then, “A lot of schools like the idea of opening the door, and being outside and some teachers feel safer (in case of fire).” However, he said putting the main building on the back of the property robbed the structure of a “street presence”.

That may be true, but the MUSD decision could not have been a surprise, as HY Architects have been working with the district for about five years in the development and execution of a district-wide Facility Master Plan. During that time, it has become evident that student safety, comfort, and costs are driving their decisions.

All four of the District’s elementary schools as well as Martinez Junior High School, will experience Measure R enhancements in coming years, but John Muir Elementary is the only one targeted for a complete replacement.