Considered one of the most-beloved plays in the English language, “The Importance of Being Earnest” is seen by many as Oscar Wilde’s masterpiece – both a smart and delightful comedy and a veiled but scathing critique of high society.

Still as hilarious today as it was when it was first performed in 1895, Wilde’s effervescent wit and sparkling dialogue do much of the heavy lifting, and, for anyone attempting to produce the play, the challenge often lies in keeping up with the material; of embracing its exuberant farce, living up to its ridiculous-yet-human characters, and delivering its rapid fire jokes with skill.

Subtitled “A Trivial Comedy for Serious People,” the story revolves around two friends, Jack Worthing (Justin Hernandez) and Algernon Moncrief (Wayne Roadie), two gentlemen of high society. Both men have each independently come up with the same ruse in order to go out and have fun and avoid family responsibilities: they fabricate imaginary people to use as a sort of prop to help them escape the drudgeries of their conservative lives.

For Algernon this takes the form of Bunbury, an ill and ailing friend who he must visit often, always, conveniently, around the same time as some social engagement he wishes to avoid. Jack takes the deception one step further, creating an alter-ego by the name of Earnest which allows him to enjoy himself in the city, while telling those at his residence in the country that “Earnest” is his irresponsible dandy of a brother who lives in town and needs frequent looking after.

During his time spent as Earnest in the city, Jack has come to fall in love with Algernon’s cousin Gwendolen Fairfax (Rachel Powers). And while he has succeeded in earning her affection, he must still contend with her intimidating and imperious mother, Lady Bracknell (Jeanine Perasso), who does not approve of the irregularities of his origin.

When Algernon discovers that Jack has a beautiful young ward living at his residence in the country, and that this ward, Cecily Cardew (Rebecca Davis), has heard much of Jack’s intriguingly wicked brother “Earnest” but never met him, he promptly decides that a trip to the country could be a very enjoyable diversion.

Though the silliness that follows is more delight than drama, Wilde still slips in a number of sly jabs at the hypocrisies of the aristocracy, crafting nuanced characters who, in their own ways, must all wrestle with ideas of prejudice, identity, and societal expectations.

The cast does an excellent job conveying those rich inner lives. Davis, who plays Cecily with a charming innocence, said that part of what helped her do that was how much she related to the character.

“I feel in a lot of ways she was me when I was a teenager,” Davis said. “She’s very dreamy, she’s very imaginative, she’s very smart. I think she lives a very small life, but she’s created a bigger world for herself in her imagination.”

Powers’ Gwendolen sweeps across the stage as the paragon of a refined, upper class lady. Powers said that she enjoyed giving life to her character.

“I love Gwendolen’s sophistication and idea of being in control of everything,” Powers said. “She plans every single scenario out, making sure the man she loves does everything she wants him to do, and she has a little bit of sass. But at the same time, underneath, I think she’s just totally such a hopeless romantic. So I think it’s fun to play.”

As Algernon, Roadie depicts a man ready, willing, and excited to be up to mischief. Roadie said that he’s always wanted to play the role since the first time he saw the show.

“There’s nothing to not like about the character and the role,” Roadie said. “He’s perfect. Perfect in every way. I love him.”

Hernandez shines as Jack, carefully balanced between between two sides of himself – the man who invented Earnest, and the man who knew Earnest was a bad idea from the beginning.

“The thing I love about Jack is how identifiable his character is,” said Hernandez. “I feel – for me – he really captures that struggle to be truthful even when it’s really hard to be and everything you want and hope for is on the line. So it’s wonderful to explore what it means to be earnest, truthful and honest, and what it is to lose and win and explore those wins and losses on stage.”

Director Doppe said that this kind of rich juxtaposition of whimsy and complexity was one of the reasons she wanted to stage the play.

“This play is very smart,” said Doppe. “It’s very articulate. It also is hilariously funny. And it has a very modern sense, even though it’s over 100 years old. I also really believe that this play, when you talk about Oscar Wilde, was a play that depicted how he liked to approach life. You see every single one of these characters having a very clear inner life – something that they’re trying to get out – and a very clear outer life – something that they’re telling everyone they are. And every single character, from the household staff to the main characters, are all very much like that.”

Ultimately, Onstage puts on a fun, fanciful and enjoyable production of a well-loved play, and it is well worth the viewing.

Theater as a business

Reviews: ‘The Fitting Room’ and ‘A Chorus Line’ 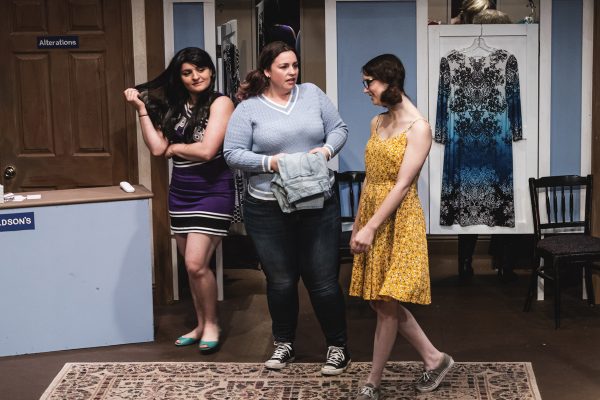 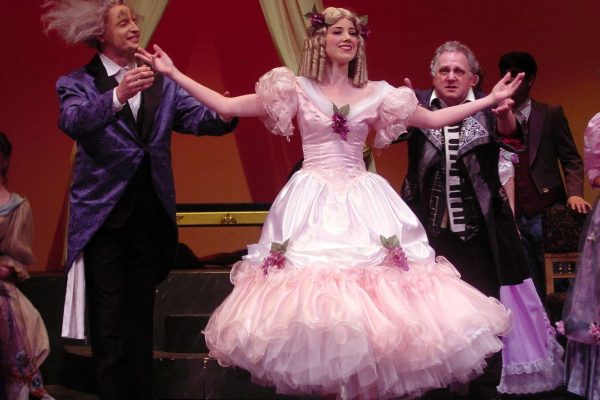 At Home With Jeff: Stories from backstage