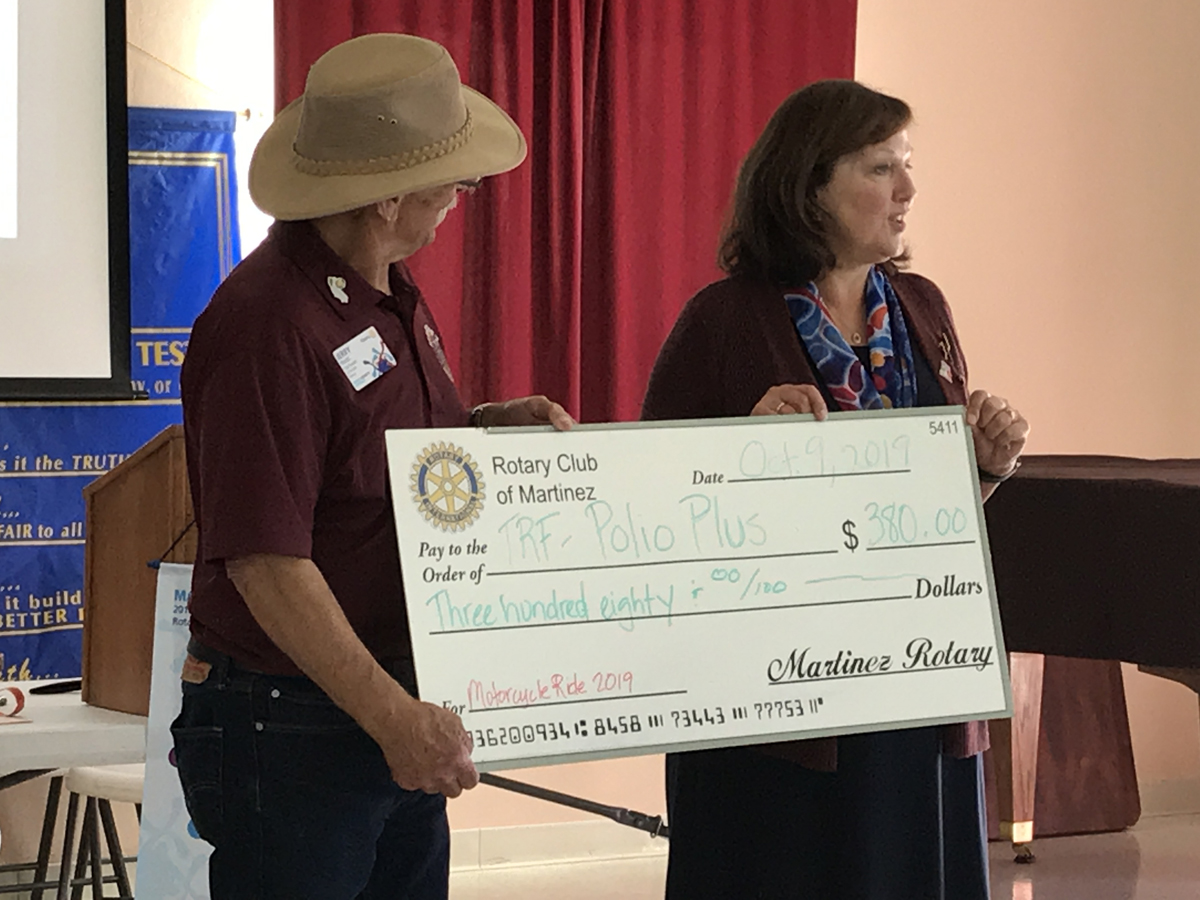 The Rotary Club of Martinez along with millions of Rotarians worldwide will mark historic progress toward a polio-free world while urging the community to help end the paralyzing disease.

The Rotary Club of Martinez has been actively participating in taking action to raise awareness, funds, and support to end polio, a vaccine-preventable disease that still threatens children in parts of the world today. For the past several years Martinez Rotary has hosted a fundraising bocce ball tournament for all the 73 clubs in Rotary District 5160, with all the funds raised being donated to Rotary’s End Polio Now Campaign. Recently club president Jerry Telles participated in an End Polio Now fundraising motorcycle ride and presented the check to Rotary District Governor Tina Akins for the campaign.

When Rotary and its partners launched the Global Polio Eradication Initiative more than three decades ago, polio paralyzed 1,000 children every day. We’ve made great progress against the disease since then. Polio cases have dropped by 99.9 percent, from 350,000 cases in 1988 in 125 countries to 33 cases of wild poliovirus in 2018 in just two countries: Afghanistan and Pakistan. And we remain committed to the end.

With polio nearly eradicated, Rotary and its partners must sustain this progress and continue to reach every child with the polio vaccine. Without full funding and political commitment, this paralyzing disease could return to polio-free countries, putting children everywhere at risk. Rotary has committed to raising $50 million each year to support global polio eradication efforts. The Bill & Melinda Gates Foundation has pledged to match that 2-to-1, for a total yearly contribution of $150 million.

Rotary has contributed more than $1.9 billion to ending polio since 1985. The Martinez Club which has contributed $210,000 with our 5160 district Bocce Ball Challenge, Bill and Linda Gates Foundation doubling our Club’s contribution and the Government matching our $210,000 grew Martinez’s Rotary’s Polio Plus program to $840,000 over the past six years.

Rotary is a global network of 1.2 million neighbors, friends, leaders, and problem-solvers who unite and take action to create lasting change in communities around the globe. For more than 110 years, Rotary’s people of action have used their passion, energy, and intelligence to improve lives through service. From promoting literacy and peace to providing clean water and improving health care, Rotary members are always working to better the world. Visit endpolio.org to learn more about Rotary and the fight to eradicate polio.