MARTINEZ, Calif. – The Colombia River and its tributaries passes through some 400 dams as it wends its way from Canada to the Pacific Ocean. “Taming” the Colombia has been a monumental project which has been going on for many decades. According to Rotary Speaker Eileen Delehanty Pearkes, the taming process has lots of downsides. Pearkes grew up in Martinez and later moved to Nelson, BC, where she now lives. She holds duel [Canadian and US] citizenship [yes, it’s legal]. The Colombia River Treaty is a 1964 agreement between Canada and the UC. It expires in 2024 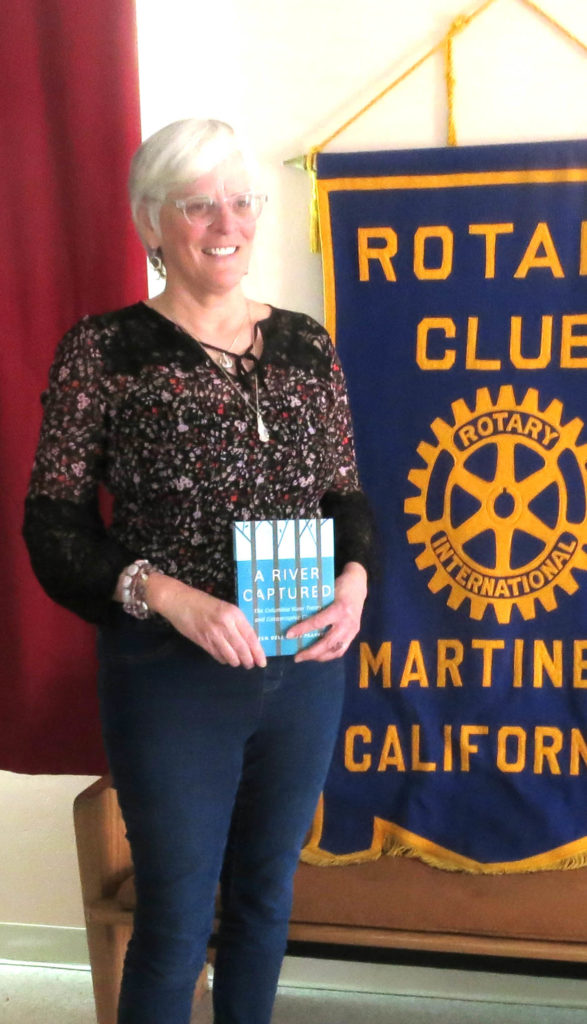 Pearkes is trained as a cultural historian. It shows! She is interested in the implications of Colombia River development on people and the biosphere. Her take is that you should think of the land first. Think about the interaction of land and nature and people. “Development” of the Colombia River has focused too much on hydro-power and providing water to US agriculture, and not enough on the downside for natives and long-time farmers.

Pearkes talked of long-time farmers whose land was flooded and hence lost to local agriculture. She talked too of silt, which is brought down the rivers in immense quantities and deposited in lake bottoms and lake borders. Fish used to navigate the rivers, but today are impeded by lakes and dams without means for circumvention. Global Climate Change is leading to new bad effects.

There are lots of so-called ‘side effects’ which are major effects when viewed from the perspective of local people and nature. To understand them requires getting ‘down into the grass’ and looking at the local level. They can be barely noticed at high levels of policy.

Eileen Delehanty Pearkes has incorporated what she learned from over a decade of research into her book: “A River Captured: The Colombia River Treaty and Catastrophic Change. It’s available from Amazon and most any bookstore. Get it!