MARTINEZ, Calif. – Deciding on a method that would lock in a price earlier than other procedures, the Martinez Unified School District Board of Education agreed that the two-step “design-build” is how it would accept delivery of the new John Muir Elementary School. 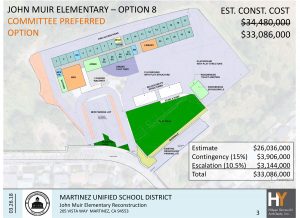 A new single building will replace the existing structures, and traffic flow and parking will be designed for the campus.

Under this method, costs are made on a “not to exceed” basis, and can be locked in earlier than two other options, “lease-leaseback,” in which a contract is awarded before costs are determined, and the conventional “design-bid-build” method, in which the same architect finishes plans and uses a prefabricated building designer as a sub-consultant.

Advisor Deidree Sakai, an attorney with Dannis Woliver Kelley, said the “design-build” approach also can be a faster method to get the campus completed.’

The Board of Education decided March 26 to accept a subcommittee recommendation of a single building, citing better security for the pupils since it would limit public access to the school.

It will have long central corridors rather than breezeways, which Boardmembers found more appealing, especially since it learned of the Feb. 14 active-shooter slaying of 17 students and staff at a Florida high school.

Another option, pegged at about $31 million, would have kept and remodeled a multipurpose building, but neither the Board nor the subcommittee found those plans as appealing, and the cost still exceeded the budgeted amount.

In other matters considered Monday, the Board unanimously agreed to request Average Daily Attendance funding from the state for absences created by the closure of Martinez Junior High School, which received a threat last month that later was determined not to be genuine.

The Board agreed to raise alternative school facility fees on new development to $6.22 per square foot, based on an analysis by Jack Schreder and Associates.

But the panel delayed deciding whether to set an alternative meeting date since its second meeting in May is on Memorial Day.