Organizers of the Jan. 21, 2017, Women’s March protests have called for a student walkout Wednesday to object to Congress’s “inaction to do more than tweet thoughts and prayers in response to the gun violence plaguing our schools and neighborhoods.” 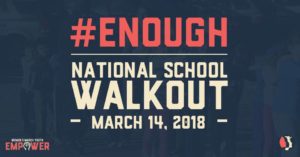 Martinez Unified School District Superintendent C.J. Cammack said he anticipates that local students may join the international demonstration, and that likely more would be from the district’s high schools, Alhambra High School and Vicente, the alternative high school.

“Just as we did during student demonstrations last year surrounding the presidential election, we will work closely with students to try and ensure that we can provide (a) safe and secure environment for all students during any walkouts and/or demonstrations,” he said.

Any such protest would be student-initiated and led, he said. However, Cammack said, school administration and staff will be speaking with students ahead of time, specifically to assure safety of students during the activities.

“Additionally, just as there are multiple perspectives across the nation about gun control and related laws, we understand that viewpoints in our community and within our student population may represent equally diverse perspectives regarding these topics,” he said.

“I am sure that regardless of viewpoints on gun control and any related laws, we can all agree students and staff deserve a safe school environment free from violence of any kind.”

The MUSD Board of Education will be voting Monday night on annual updates to the district’s school safety program.

Martinez schools, as do other campuses, count on student attendance to receive average daily attendance (ADA) funds from California. Would a demonstration impact that?

“The impact would be dependent on how much of the day students may be out of class,” Cammack said.

Women’s March Youth Empower, which has called for the demonstration, has requested students walk out of schools at 10 a.m. for a period of 17 minutes, one minute for each of those killed in the Feb. 14. Shootings at Marjory Stoneman Douglas High School in Parkland, Fla. In addition to the fatalities, 17 more were wounded. Of the dead, 14 were students ages 14 to 18, and three were school employees who were helping the students who were under attack.

The suspect in the shootings, Nikolas Jacob Cruz, 19, who had been expelled from the school, has been charged with 17 counts of premeditated murder and 17 counts of attempted murder. Shortly after the shootings, surviving students campaigning for increased gun control formed Never Again MSD (for Marjory Stoneman Douglas), a social media advocacy group.

Cammack has heard that some residents have expressed interest in supporting students during any protest or demonstration.

However, on normal school days, such as Wednesday, the District doesn’t provide to the public “general access to our campus,” he said.

“Visitors must have legitimate business to conduct at a school which is specifically related to their child or their student who is in attendance at that school,” he explained.

“Access to our campuses and students will remain closed to the general public during the school day, regardless of any walkouts or activities by the students,” he said. “We will continue to focus on maintaining a safe and secure campus.

“While we appreciate the continued support of our community, members of the public will not be allowed on our campuses for the purpose of supporting and/or being involved in any student-led actions,” he said.