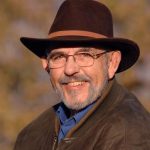 This week would be the best time to notify your next of kin that you might possibly be attending the state-side version of Bullshot Crummond; a very cool, corny and silly British low-budget comedy at the Campbell Theater in Martinez as early as Friday, the 23rd of this month. All though I do not really expect you to laugh yourself to death, there is a good chance you may return to your residence, happy and slightly dazed, after witnessing five delightful actors playing really silly characters in a parody of a true pulp-fiction 1930’s detective by the name of Hugh “Bulldog” Drummond. In the original Sapper books, crime solver Drummond was purportedly a very clever and good-looking, perhaps even dashing, World War I veteran with an amazing crime-solving mind-set. This low budget British comedy take-off takes this James Bond type character down a Monty Python path.

Professor Fenton (played by John Blytt) is a scientist in the need of “protection” because he has concocted a certain chemistry and created a formula that will turn that chemistry into very valuable synthetic diamonds. Diamonds are, of course, a catalyst necessary to provide funding for all kinds of satisfactions, and certainly adequate to fund the purported evil plans of a certain Teutonic European criminal, Otto Von Bruno (Robert Marcus) and his femme fatale partner in crime, Lenya Von Bruno (Melynda Kiring). Both Bruno’s are bombastically outrageous. Hugh “Bullshot” Crummond (Jacob Henrie-Naffaa) in this parody is more a hapless hero with more daring and dumb luck than true skill. The Bruno evildoers in pursuit of the Professor’s secret formula & chemistry have crashed their plane in the British countryside while in the process of kidnapping Professor Fenton. Fenton’s daughter, the beautiful Miss Rosemary Fenton, has contacted Bullshot and enlists him to help save her father, is played skillfully by Erin Hurley. John Blytt also portrays 6 other characters in this play! Each and every portrayal is outrageously silly and at the same time, delightful! 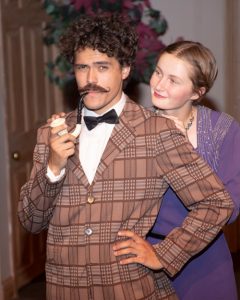 I saw this in rehearsal this week and truly enjoyed it. If you have not seen this play before, you may have seen the 1983 movie of the same play, with a similar but shorter title, simply “Bullshot”. While the gags are now quite familiar in this type of melodramatic fictional crime solving mystery, never-the-less, Bullshot Crummond, a clever takeoff on the original long time comic hero of British books, films, and plays, and is well worth visiting one more time.  These two cartoon-like comic criminal characters, the Brunos, while in pursuit of the secret diamond formula, don disguises making them appear even more evil and dastardly in their roles as nefarious criminals. Costumes can always add significantly to the character development and the work by costumer Lisa Danz works exceptionally well in this wonky work or art. Some of the props are also outrageously silly, but all is fun and grand in theater land – – – Right?

Directors, Randy Anger and Matt Davis, are excellent in delivering nonsense and I highly recommend this crazy play be added to your bucket list so that you may be certified a survivor! The play runs from July 23rd through August 15th, with a Thursday performance at 7:30 pm along with Friday and Saturday shows at 8 pm, plus Sunday Matinees at 2:30 pm. Connect on-line by going to their web-site at https://ww.campbelltheater.com or call (925) 350-9770 to purchase your tickets. You may also gather additional information on other events at the theatre by going to https://www.facebook.com/MartinezCampbellTheater/? Ticket prices are $22.00 for adults and $19.00 for seniors, students, and active military. The Thursday performance is $15.00. All shows require proof of vaccination, just as it says on the website page! You must bring your Covid-Card to see the show. The theater is located at 636 Ward Street, in Martinez CA 94553. “Afterall, long before there was Bond, – – – there was Bullshot!!”