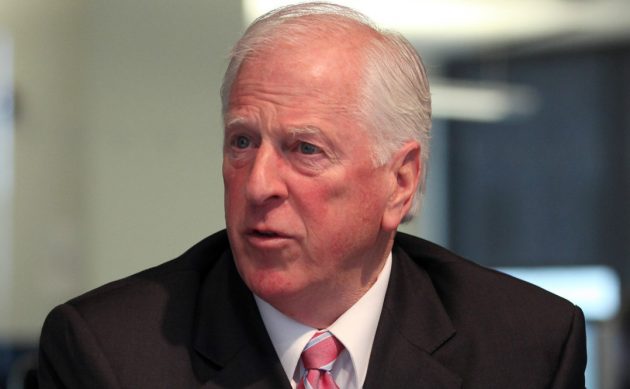 The latest group of people who are trying to enter the United States through amnesty or asylum are coming from conditions that have made them desperate, said United States Representative Mike Thompson.

“These folks are unsafe in their home spot,” he said. “They are appealing to the United States for amnesty. If they stay in their home country, they’ll be murdered or raped. Their children will be taken off to some sort of sexual trade. They are making an application, ‘Please help us. We’re in deep trouble.’”

In the past, the United States has accommodated people in such dire situations, he said. It should be willing to do this again, even though there are people who either have erroneous information or are deliberately sharing misconceptions about the immigration situation.

Thompson (D-Napa), whose District 5 includes portions of Martinez and all of Benicia, isn’t happy that families have been separated, and strongly condemned the policy that was put in place in May under President Donald Trump’s “zero tolerance” policy.

He discussed the situations in an exclusive interview with the Gibson newspapers Martinez News-Gazette and Benicia Herald and shared statements he has issued on the subject.

“Under the new policy, parents are arrested and detained by the U.S. Department of Homeland Security (DHS) and separated from their children who are detained separately by the U.S. Department of Health and Human Services. Children may be placed in facilities thousands of miles away from their parents, with no means of communication,” he said in one of the statements issued this spring.

The statement said the children already have endured violence, poverty and instability in their home countries as well as a long and dangerous journey to the American border.

Thompson elaborated separately, especially answering those who have asked if the families were aware of the dangers of their long trek as well, the likelihood the current administration would turn them aside and the dangers to unaccompanied minors sent north to enter the country.

“The situation (they left) must be doggone bad to send your kids to safety,” he said. “I suspect it’s a function of what are the choices – send your daughter with people to get to her cousin in California or wait for human traffickers to take her.”

The policy is inflicting “lasting psychological trauma on children,” his statement said. It said the separations are cruel and immoral and are a form of child abuse.

In another joint statement issued in June, Thompson joined 25 faith leaders in condemning splitting up families.

That statement cited the National Child Traumatic Stress Network that said the children have endured “frightening, dangerous or violent event that poses a threat to a child’s life or body integrity,” and called their experiences “refugee trauma” that can result in stress disorders similar to that of war veterans.

It also pointed out that federal law, recognizing that unaccompanied minors need intensive care, defines how Health and Human Services must treat them to mitigate intense emotional upset, depression symptoms and other behavioral or emotional changes.

Because of his concerns, Thompson has sought opportunities to visit the places where the children are house. And that has presented its own challenges.

Late in June, he joined three other California members of the House – Doris Matsui (D-Sacramento), Jimmy Panetta (D-Carmel Valley) and Brad Sherman (D-Sherman Oaks) – visited a place in Virginia that houses children separated from their parents at the border.

They issued a joint statement after that visit: “The children we met today have faced unimaginable horrors coming to the United States and the trauma of that journey is only perpetuated the longer they are separated from their families.

“Today’s visit only underscored the extreme urgency with which we must work to reunite families and the lasting trauma the Trump administration’s inhumane policy has caused on thousands of children.

“While we appreciate that this experienced facility is providing necessary care, no standard of care can meet the needs of children desperate to see their families again and the administration must present its policy for a swift reunification infrastructure immediately,” the joint statement said.

Getting in to those caretaker homes has not been easy, even for a member of Congress.

“Even when you follow the rules, they’re not always helpful,” he said. He has wanted to visit sites in his own district. “I followed the rules and got the approval to go in, and when the day came, they changed and said ‘No.’”

Martinez’s other member of the House, Mark DeSaulnier (D-Walnut Creek), whose District 11 holds the remainder of Martinez, also has been frustrated at gaining access to observe the homes that contain the separated undocumented children from Central America.

Finally, after multiple requests, the pair were granted permission earlier this month to visit a Health and Human Services (HHS) home in Pleasant Hill that holds immigrant minors.

They issued a joint statement that said the home had “high standards for children located there,” but they reiterated their view that “no level of care at these facilities can make up for the fact that children are subjected to the harmful and lasting trauma of being separated from their families.

“What’s more, most of the children at this facility are not the kids separated from their parents about whom we are demanding more information,” they said.

“We need answers – HHS and the Department of Homeland Security must allow us to obtain more information about separated families, present their plan for reuniting families as efficiently as possible and further outline the progress of this eff ort as it continues.”

Thompson said his protest against being denied access made the difference.

“I got noisy, and they backed off,” he said after some homes were made available for inspection by members of the House.

“I want to take a little bit of the credit,” he said. However, even when permission came through, Thompson didn’t get his entire request.

“They facility they allowed us to visit was not the facility we wanted to visit,” he said. “I got them to change the policy, but it wasn’t the facility I wanted to see. We need to make life uncomfortable for them. We have oversight responsibility,” he said.

And when a member of Congress asks to see where these undocumented minors are housed, that request should be taken seriously and permission should be granted, he said.

“I can only speak for myself, but I believe it holds true for Congress: We have something else to do. We do not need to drive to Pleasanton or drive an hour from Washington D.C. to Virginia. I had other things I was working on. They need to understand we’re not doing it for the fun of it. It is our responsibility,” Thompson said.

Some have asked why Mexico did not offer help the caravan of travelers from other countries who were making their way to the United States. “They’ve got their own set of problems there,” Thompson said. But that makes the case for the United States to work with Mexico to improve the living and working conditions in America’s neighbor to the south.

There are ways to “vet” the families who have arrived, and those practices already are in place, Thompson said. “That’s been a pretty successful program, and something that’s been around as long as you and I have been around. That’s not changed.” To use the existing problem, it makes more sense to keep families together, he said. “To put them in group homes is more expensive.”

The vetting also is used to make sure unaccompanied minors who say, ‘I’m going to see my uncle’ in a certain city is reaching out to a genuine relative rather than a human trafficker, he said.

Thompson is worried about the children who were brought to the United States when their parents slipped in. President Barack Obama established Deferred Action for Children Arrivals (DACA) that allowed some of those children to receive renewable two-year periods that deferred deportation. Trump has repealed the DACA program by executive order. “That’s why we’re in this problem,” Thompson said.

The country’s general immigration situation is another situation that needs to be addressed. Thompson doesn’t favor open borders, but said a wall along the southern border isn’t an answer.

More Border Patrol agents, given the equipment they need, plus better use of technology is a better approach, Thompson said.

As for the country’s approach to immigration, Thompson wants something that is fair and enforceable.

There have been legislative bills he said met both qualifications. One that has been stalled out is a bipartisan plan.

Last year, the U.S. Senate passed comprehensive legislation that earned bipartisan support. But when the bill was introduced to the House of Representatives, Republicans refused to take it up for a vote.

Eventually, some moderate Republicans signed the paperwork called a discharge petition that forced the House to consider it for a vote. Instead, other Republicans favored a GOP bill described as compromise, although Thompson said the compromise was among only Republicans. Another bill was considered even more conservative and also was Republican-backed, Thompson said.

The House decided to vote only on the two Republican bills, which failed, and the bipartisan bill was never seen for a vote.

Could Trump be using his “zero tolerance” as a way to motivate Congress to pass workable immigration legislation? “Who knows with him?” Thompson asked.

He said Trump promised immigration reform, even offering to write legislation and working with either party that would get it passed. “But look where we are,” Thompson said. “He’s full of prunes.”

He said the president offered to do the same type of reform on gun violence, then after a recent news conference was over, he proposed taking guns away without due process, Thompson said.

“Someone said, ‘You really can’t do that,’” Thompson said. “Someone has not taken the time to study.”

Thompson said there’s “no doubt” that there is the perception that some paths to citizenship for those who already have entered without documentation could be seen as “jumping ahead in line.” But Thompson said that’s based on a lack of information and mistruths that have been promoted as factual.

Immigration reform also is needed because the United States has a shortage of employees. “Even without factoring 6 million job openings,” he added. Add physical labor jobs that some Americans aren’t willing to do, and the number grows.

Because of labor shortages, farmers are more interested in mechanization than ever before, Thompson said. But there are some jobs machines can’t do.

“You can’t build a machine to frame a house or clean a hotel room or make beds in a hotel room. There will always be some jobs available,” he said. Improved immigration is one way to fill those jobs. “Do the bill,” he said he is urging his colleagues.

Thompson is sad that military service no longer is a pathway to citizenship for undocumented immigrants, but said it remains an option for those who are here with permission and paperwork.

He said the way some people feel toward undocumented immigrants or immigrants in general is reflecting on naturalized citizens and some native-born Americans.  Reports of harassment are increasing, he said.

“I have a friend who is an American citizen, born in the United States and has lived here her entire life,” he said. “She is afraid to go out of her house without her passport.”