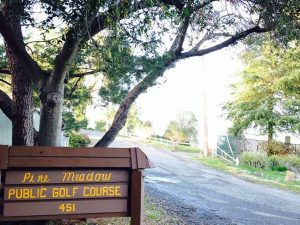 MARTINEZ – On July 10, 2019, the City of Martinez, DeNova Homes, Inc., Civic Martinez LLC, Meadow Creek Group LLC, Friends of Pine Meadow, and Martinez residents Tim Platt, Kerry Kilmer and Mark Thomson reached agreement on a settlement of all outstanding disputes about the disposition of the former Pine Meadow Golf Course and the validity and interpretation of Measure I.

All parties have agreed to the following, subject to Court and City Council approval:

• DeNova Homes will develop 65 houses on approximately 12 acres of the former golf course.
• Approximately 9 acres of the former golf course will become a public park, to be deeded to either the City or another appropriate entity.
• $1,000,000 of improvements on the park area and associated open space and pedestrian paths will be provided and paid for by DeNova Homes.
• The City will conduct a public process during the summer of 2019 to determine park uses and associated public improvements in the park.
• DeNova Homes will donate $500,000 towards the acquisition and/or improvement of public open space or parkland in or near the City of Martinez.
• Clarifying changes to Measure I’s language have been accepted by all the parties and will be put in place upon approval by the court and the Martinez City Council.
• All the lawsuits between the parties will be resolved.

This Settlement Agreement results from months of effort by the parties. For years, the parties have disagreed about the future of the Pine Meadow property and City policy regarding open space and housing issues. These disagreements have led to multiple lawsuits.

While the parties continue to believe strongly in their respective positions, they acknowledge that opposing views may also have some validity. Rather than continue suing each other, the parties have come together to reach a settlement based upon a common vision for the future. That vision includes a new public park, planned additional funding for park amenities, and a way forward for development of new housing on the former golf course property.

The parties are now united in their support of this Settlement Agreement and its goals and urge their respective supporters to support it too.

Following are statements from each of the groups involved in the settlement:

On behalf of the Friends of Pine Meadow and its supporters, Tim Platt said: “We believe this settlement will be far better for open space advocates and for Martinez and its citizens than enduring more years of litigation. The City will gain a large new public park and the future of the former golf course will finally be resolved.”

Dana Tsubota, Executive Vice President of DeNova Homes, Inc. stated that: “We are excited to be able to finally move forward on building our long-planned project in Martinez. We think the end result – both the new park and the additional housing, will benefit the City and its residents.”

On behalf of the City of Martinez, Mayor Rob Schroder, noted that: “Issues relating to the balance between open space preservation and housing development have led to litigation and disagreement between advocates for open space and housing proponents. With this settlement, we hope to put those disagreements behind us and move forward for the betterment of the City and all its citizens.”

This press release represents the definitive statement of the parties involved about the settlement they have reached.