Still in my pajamas, savoring a first cup of coffee, I surveyed our backyard out the kitchen window. It was only 7 a.m. but the sun was already bright. Because of the wet winter, our plants are going crazy this year, especially the flowers. Gladiolas, verbena, lavender, and roses are all blooming in profusion right now. The apricot tree has more fruit this year than at any time since we planted it ten years ago. I counted over 100. We also have more butterflies this year than ever before.

I always feel a little guilty looking at our yard that is still not finished. Several years ago, we tiered the hillside and installed irrigation. The year before last, we installed a new fence and stained the deck. Many more projects are waiting. Vivian planned on installing decorative tile this summer. The way things are going, that may get postponed until next year. I need to extend the irrigation line and finish off the end of the retaining wall… 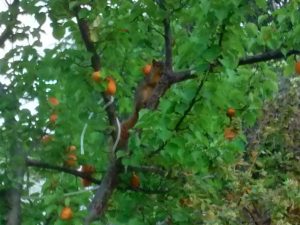 As I absentmindedly mused on these things, four golden apricots caught my eye laying on the red bricks. “That is odd”, I thought. The day before, one piece of fruit had been on the ground but then disappeared before I could pick it up. Now there were four. I made a mental note to pick up the fruit as soon as I got dressed.

As I puzzled, there was a small movement up in the tree. A little brown squirrel jumped from branch to branch. A squirrel! I hollered to Vivian, “There is a squirrel in the apricot tree! He is after my apricots!” She called from the bedroom, “Go get them before the squirrel does.”

The head fog cleared immediately and I sprang into action. Grabbing a Tupperware out of the dish rack, I sprinted out the back door in my pajamas. When I looked up, the squirrel was sitting in a crotch of the tree with an apricot in his little hands, happily munching. He looked as guilty as a kid caught raiding the cookie jar. As I approached, he scampered away.

Barefooted, standing on my tiptoes, I grabbed as many fruits as I could. Vivian came out to help as I clambered to the top of the retaining wall to reach more. We harvested everything we could reach. There were still 20-30 on the tree that we could not reach without a ladder The ladder would have to wait until we returned home from church services. Sunday morning is always a little hectic and we were already behind schedule because of the unplanned fruit picking. 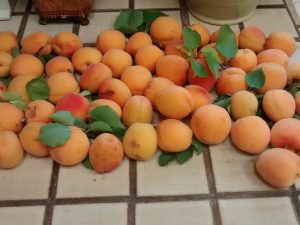 Once they were safe in the kitchen, I took a quick count. We had saved 52 beautiful golden apricots. The smell was heavenly. I checked again at 11:00am as soon as we go thome. The tree was bare, the four on the ground were gone, and the squirrel had disappeared. There was no trace of apricots, apricot skins, or pits. Either the squirrel ate them or took them away. If I had not happened to gaze out the window that morning, the squirrel would have run off with every one!

I went inside to double-check my stash. There were still 50 after Vivian and I each tasted one. What does one do with 50 apricots? We could eat them fresh? Too many. We could dry them in the sun? I tried that once and the birds got half. Plus, I would need to find sulfur. Apricot jam? Yes!

Vivian and I both love apricot jam. There were oodles of canning jars in the garage that I had been wanting to use. I didn’t weigh the fruit but it came to 10 cups chopped, just enough for two batches. We ended up with 16 half-pint jars of jam. There were 17 before we opened one to spread on toast as a quality control check. The jam turned out excellently.

Vivian and I have canned different things over the years. It always happens right after we come into lots of free produce. My wife’s aunt used to give us grocery bags full of plums when her tree ripened. We made plum jelly and jam. A couple years ago, my brother gave us a lug of apples off his tree. We put up twenty quarts of applesauce. It was delicious. Last year, we had an abundance of lemons so we put up lemon marmalade. It was o.k. But not spectacular. I am looking for a better recipe. 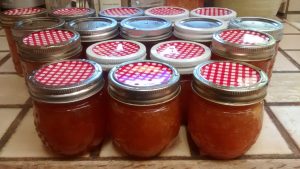 Completely out of the blue, our good friend from Fairfield walked in last weekend with a big pail of peaches from his tree. He is a bachelor living alone. He can’t keep up with the produce so he gives it away. There is no way that Vivian and I could eat all those peaches before they spoiled. After he left, we dug all the equipment out again and put up 18 half-pints of peach jam. There were 19 until we did some more quality control checking.

I am always on the hunt for free produce and will try anything. There are recipes for canning everything that grows. My grandmother was known for her canned green beans. My grandfather on the other side was famous for his seven day pickles. My brother used to can olives.

My brother also used to can tomatoes, but he did it the easy way. He grew a dozen tomato plants every year. During the summer he would pick ripe fruit every day and set it in his freezer. When his freezer got full, Lewis would boil the tomatoes in a big pot, pull out the skins, add spices, and put them in jars. He routinely gave me jars of olives but never tomatoes. If you wanted to taste Lewis’ canned tomatoes, you had to go to dinner at his house.

Lewis is gone now. He died in 2016. My grandparents and Vivian’s aunts have also passed on. Even though they are gone, their love of caning is alive in Vivian and me. We are going to see our grandchildren next month. Each will receive a jar of apricot jam and a jar of peach jam for their very own. We will tell them all about canning fruits and vegetables. If there is any free produce in Washington or Nebraska, we may even put some in jars. Until then, I am going to search Google for a squirrel repellant system to use next year.