Martinez City Council has adopted a four-district voting map that is expected to be in use by the Nov. 6 general election. 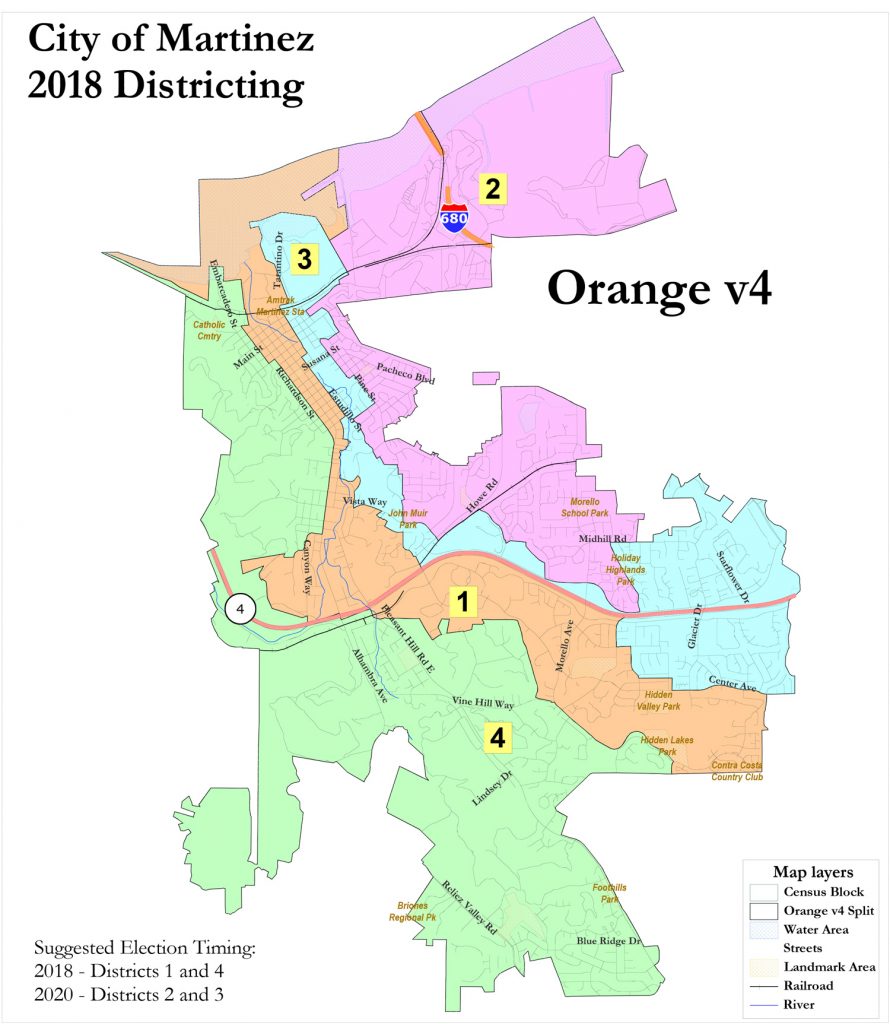 That means voters in only two sections of the city will be choosing the seats currently occupied by Vice Mayor Lara DeLaney and Councilmember Debbie McKillop. In the past, all Council seats were citywide elections.

However, the mayor’s position, also up for vote this year, will remain an at-large decision.

The Council voted 3-1, with McKillop absent, in approving the fourth iteration of the “Orange Map,” which was revised several times to accommodate newly-annexed land as well as to reduce the number of bifurcated precincts.

Because this is a busy year for the Contra Costa County Elections Department, and because Martinez City Council is not the only area agency that was forced by Malibu attorney Kevin Shenkman’s demand letter to switch from at-large to by-district voting, the Council had urged its staff and consultants to make the necessary changes to avoid having the city pick up the tab for its own election.

Martinez Unified School District and several other Contra Costa County cities and school districts also have received demand letters, sending those agencies scrambling to avoid expensive lawsuits even if they disagreed with Shenkman’s contentions that their voting systems are racially discriminatory.

Currently, the city contracts with the county to conduct Council and mayoral elections, which are less expensive when consolidated with those of other cities and school districts.

Although the Council decided Dec. 6, 2017, to change its electoral system, the switch wasn’t entirely voluntary. Less than two months before, Shenkman accused the city of violating the California Voting Rights Act because of the at-large elections, which he characterized as “racially polarizing” and a method to dilute the impact of minority and protected-group voters in electing candidates.

He cited the case of Damien de la Rosa’s campaign in 2006 for mayor, in which he was defeated by Rob Schroder. Shenkman said de la Rosa received “significant support from Latino voters in Martinez,” but was defeated “due to the bloc voting of the non-Hispanic white electorate.”

Shenkman failed to mention the city’s 2012 Council election, in which AnaMarie Avila Farias was the top vote-getter, with 8,030 votes – more than 30 percent – that put a Latina-Hispanic woman on the panel. Her numbers were higher than Mark Ross, who also was elected with 7,863 votes, or 29.85 percent.

In a virtually identical letter that forced the Martinez Unified School District to change to by-trustee area voting, Shenkman cited de la Rosa’s Council defeat, but ignored the 2014 Board of Education election that seated Deidre Siguenza with 4,254 votes, also the most earned by any candidate. Bobbi Horack was elected with 3,744 votes, and they defeated Ronald Skrehot, with 2,645 votes.

The Orange map, one of three color-named maps submitted by demographic consultant, National Demographics Corporation, followed the Council’s directive to make the districts linear microcosms of the city, in general running from the waterfront and downtown business district south to the city’s uplands and less populated areas.

Most cross California Highway 4, resolving a frequent citizens’ complaint that the city’s southern side historically has not been well-represented. As it is made up currently, the Council has only one member from south of Highway 4, McKillop.

The demographer’s other two maps followed the same Council directives, and all three met the Federal Voting Rights Act mandate that districts be as equal in population as possible.

Shenkman has refused to clarify whether he is representing Martinez residents or a Texas activist group.

The news release said the grass roots group believe by-district voting would “serve the community’s geographic and ethnic diversity,” and would encourage elected officials to represent constituents better while minimizing special interest influences.” It added that the at-large elections are skewed toward incumbents.

The organization’s map divided the city into five Council districts, which would require the mayor position to rotate among Councilmembers, something the existing Councilmembers said they opposed without a specific referendum, since voters had decided to change from a rotating mayor to an elected one.

However, none of the public maps met the federal legal requirement that the voting districts have less than 10 percent aggregate population difference, and could not be considered because they violated that law.

Vice Mayor Lara DeLaney cast the only vote in opposition to the map.

Like the other members of the panel, she has been troubled by the accusations, by Shenkman’s approach that forces an agency to make the change within 90 days of deciding to proceed and by the way cities are left with no alternative unless they are willing to gamble heavily with taxpayers’ money, even when Shenkman’s contentions appear to be in error.

The only city to fight a Shenkman demand letter lost in court and had a four-district Council election system imposed, with its mayor left at-large. In failing to defeat Shenkman, Palmdale ended up paying $7 million in court costs and another $4.6 million in legal reimbursement to the Malibu attorney.

Other cities initially challenged Shenkman’s accusations, but settled for several hundreds of dollars on up to several million.

DeLaney cast the sole vote against the map, but said her vote represented her views not on a particular map but on the entire situation in which Shenkman had placed Martinez.

“It disenfranchises the people,” she said, countering the attorney’s claim that district voting would allow protect groups to have a better chance of impacting elections, especially with the candidates of their choice.

“I hate the extortionary position I’m in,” DeLaney continued.

She endorsed Ross’s statements, in which he described the situation as having “a political edge, to kick out the mayor,” which he noted “wasn’t done.”

He disagreed with the contention that districts would boost Latino-Hispanic voting, since the city is more than 68 percent white and less than 15 percent Latino-Hispanic.

Those numbers, combined with how integrated minorities are throughout Martinez, meant the city is unable to create “majority minority” district that could assure a protected group’s ability to elect a specific candidate, although other laws restrict districting by race.

Ross said there is no segregation in the city’s at-large election now, but described by-district voting as a form of segregation, since all residents, including Latinos and other minorities, would be restricted from voting for the entire Council.

He noted that some of the public maps would have forced many of the elected incumbents to compete in a single district, while courts have ruled that votes of the people should be preserved and that no sitting official’s term could be affected.

“You want to take a shot at us?” he asked. He urged endorsers of the change to challenge incumbents in upcoming elections.

As for those who hoped districting would force an end to the elected mayor, he said, “It didn’t work.”

He noted that those who may have reached out to Shenkman to write the city weren’t present. “We don’t have one voice except Felix.”

That is Felix Sanchez, a resident who was the lone member of the public to speak at the public hearing Wednesday night.

Ross said the new system would deny voters the right to select the entire Council. In addition, because by-district voting numbers are so small, it could open those elections to being affected by special-interest groups – which districting advocates said happens now – rather than to candidates who answer to the city at large. “It’s not serving the public well,” he said.

While he called the California Voting Rights Act “a piece of legislation with good intent,” he disagreed strongly with how it has been used to put the city in the position of changing its voting system by a quick deadline or face an expensive lawsuit.

Sanchez told the Council the matter has been debated hotly online, and reminded members of his earlier comparison of the preferred map’s districts to long slices of bread.

He called the districts’ designs gerrymandering meant to retain incumbents, and he suggested the map might not withstand a court challenge. “A judge would look at it and toss it out,” he said.

The city has been striving to meet an early March deadline, and will do so with time to spare Feb. 28 if it reaches a final adoption of the ordinance establishing the new district voting system. During this time, Martinez has been protected from suit by 2017 legislation that also limits to $30,000 Shenkman’s legal reimbursement for his letter.

In other matters before the Council, the panel agreed to amend its contract with the California Public Employees Retirement System Board Administration in accordance with a new memorandum of understanding for a contract with the Martinez Police Officers’ Association that ends in 2019.

The Council will see the matter again for final approval.

On the consent calendar, the Council authorized a Federal-Aid Program Supplement and Funding Requirement for $1.023 million for the reconstruction of Brown and Green streets.

The resolution is a requirement if the city is to receive the federal reimbursement, because the Council must authorize City Manager Brad Kilger to execute the Program Supplement to Administering Agency-State Agreement for Federal-Aid Projects before reimbursement can be requested..

The Council also adopted resolutions authorizing engineer reports for eight city Landscape and Light Assessment district. The reports must be filed before assessments are levied.