I have been a resident of Martinez for 30 years. I have had the honor of serving on the Martinez City Council for 25 years, 19 years as Mayor. I am married with four grown daughters and two grandchildren. 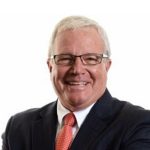 For 44 years, I have been working for my family business that my grandfather founded in 1933. Three years ago, I moved that business to downtown Martinez to be more connected to the businesses and residents of this wonderful community.

The pandemic has been difficult for everyone, but most notably to small businesses. The City of Martinez has been actively involved in helping small businesses through programs such as street closure and K-rail programs to allow restaurants and other businesses to operate out of doors, and the $350,000 micro-grant program where Martinez businesses received up to $5,000 to help offset costs, pay employees, and keep their doors open.

The City Council also made the conscious decision to not enforce the long-standing ordinance that prohibited food trucks from operating in the downtown core, so as to allow businesses that served alcohol but did not serve food, to stay open. When the state mandate that required the serving of food at these establishments expired, we continued to allow food trucks in the downtown in-spite-of the ordinance prohibiting this.

The council instructed the city staff to begin a review process of the existing ordinance with the idea of allowing food truck participation in the downtown area as the pandemic started to ease.

Unfortunately, before that review was completed, a food truck started operating at a local business that moved its operations to Main Street and Ward Street. I started receiving complaints from downtown restaurants that the city was not enforcing its ordinance regarding food trucks.

These businesses were concerned that without enforcement food trucks would flock to our downtown and their businesses would suffer. The city council discussed this issue at last Wednesday’s meeting. Prior to the meeting, a petition was delivered to my office with a request that I deliver it to the city clerk for distribution to the city council and public and I did so.

In the last few days there have been allegations on social media by a downtown business owner that I had circulated the petition, and forged his signature, or the signature of one of his employees. This individual has also sent a threatening and vulgar text to my wife. This type of behavior crosses a line of personal safety for my family.

These claims are absolutely false, and in my mind, slanderous. I had no part in developing the petition, circulating it or promoting it. The petition was dropped off at my office with the request to send to the city clerk, which I did. To not send it on would have been a dereliction of my duty as Mayor. It is unfortunate that political discussion can elevate to such a personal and harmful level. This does nothing but pit us against each other and our forward progress is sidetracked.

There is a process to democracy and regulations the City Council must follow. You may access the City’s website to view the video on how that process played out at the February 16 City Council meeting, read the staff report, including comments from the public.

A meeting of the City Council Economic Development subcommittee will be held on Wednesday, February 23 at 9:00 am to discuss the current Food Truck ordinance and to take testimony on updates and changes to improve the ordinance so it works for everyone. Their recommendations will come to the full city council for consideration in the near future.